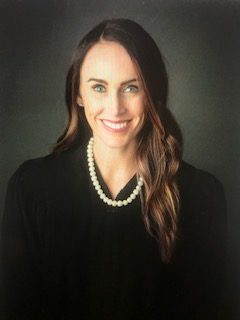 I was a life long prosecutor who spent my entire career fighting for those without a voice. My main focus was on cases that involved the sexual assault and homicide of children under the age of ten years old. I was the second youngest female to be promoted to the Special Victims Unit and the youngest female to promote to the Homicide Division. In prosecuting case such as sexual assault and homicide I learned the difference between individuals that need to be put away to protect society and individuals that can be rehabilitated, receive services and therapy, and reintegrate into our society. I felt it was important to have people that can distinguish those individuals on the bench. Furthermore, I felt that there was a need for trial attorneys on the bench. I have done almost 60 jury trials, there is a tremendous backlog of trials in our system, both in the criminal and civil realms. I realized that I could sit around and complain about the system or I could get in it, roll up my sleeves, and make a difference in what I was seeing.

It is always a court's responsibility to uphold the law. Your personal views on a certain topic can never enter your judicial arena. Judge's have many jobs, but the most important is to follow the law.

In the decision the Court discusses that the "DOMA rejects this long-established precept. The State’s decision to give this class of persons the right to marry conferred upon them a dignity and status of immense import." Basically stating that by States allowing same sex marriages, it conferred upon them the same dignity as was shown to those in opposite-sex marriages, which gave them equal access to liberty and equal rights.

As a judge, pursuant to judicial cannons, I am not allowed to discuss my personal opinions on the topic but I believe my answer above properly states where the Court was coming from. I can say that I believe all individuals within my courtroom, and any courtroom within this country, should be treated with the same dignity and respect as anyone else. I stand by that statement firmly.

Again, pursuant to judicial cannons I cannot publicly comment on personal views in regards to political issues. However, I believe it is appropriate for me to say that I do not believe in any type of racism, sexism, etc., and strongly believe that all individuals should have equal access to education.

In Newman several multiple areas of the law were covered (such as attorneys fees) but I believe this question is directed to the fact that the owner of the restaurant refused to serve African Americans because he stated that the Civil Rights Act violated his religious freedoms. The United States Supreme Court disagreed standing by the premise of the Civil Rights Act that states it is illegal to discriminate base on race, ethnicity, and other characteristics when it comes to things such as housing, employment, and public accommodations. This became a hot button issue again when another case Masterpiece Cake shop vs. Colorado Civil Rights Commission received national attention recently in 2018. In that case, a cake shop owner refused to sell a cake to a same sex couple. It was a 7-2 decision where the Supreme Court found that the Commission did not utilize religious neutrality when making their decision, however, the Court did not rule on the broader question of the discrimination vs. freedom of religion/speech aspect of the case.

As a prosecutor I was not faced with this issue. I was appointed to the bench in April by Governor Sisolak and have not faced this issue as a judge either.

This is not something that I routinely deal with because evictions are done at the justice court level. As I have stated previously, judges are not law makers, they are law followers. Thus, if citizens feel that the eviction process is not equitable these concerns should be brought up to law makers. If there is something the courts can do and still follow the law, I would be happy to hear about this issue, or any other issue, at a public judges' meeting which are open to the public and held frequently.

As part of my "entry of plea" process I ask each and every Defendant if they are a United States Citizen, if the answer is no, I make sure that they understand that if they are not a United States Citizen there can be adverse consequences such as deportation. If they feel that they do not understand that, I always continue the matter for them to speak to their attorney or an immigration attorney so they are completely aware of their rights.

I have not seen this practice at the Regional Justice Center but I have seen many individuals with criminal warrants arrested after leaving court. If law enforcement has a valid legal warrant, then as a judge I recognize that as lawful.

I think the root cause of why we see this is due to some of the hurdles kids face at such a young point in life. Time and time again when I read through a Defendant’s pre-sentence investigation report and I look at their family background it is quite often that I see a history of the person being abused, neglected, and/or CPS being involved in their childhood. I also see that there is a lack of stability in their life, for example, they are moving from apartment to apartment, or motel to motel, being raised by a single parent or grandparent etc. Some are in homes where there is little to eat and they are suffering extreme levels of poverty, thus they make bad decisions because perhaps they feel like there is no other choice. In order to create change I really feel as though we need to get to these kids before the criminal activity begins. Showing kids that there is hope, there are avenues, and that there are people that are rooting for them instills a sense of positivity where they may feel like they have none. I really like the program “Hope for Prisoners” and have discussed with my colleagues the idea of starting a program like that for younger kids before they are faced with such tough decisions so early on in their life. I think as a Judge it is my responsibility to go out into the community and educate individuals, both adults and children, on what I have seen in my courtroom as a judge and as a prosecutor and help our community as a whole.

There are a multitude of issues in the system but I am going to focus on the efficiency of the system for my answer. There are far too many cases in the system that are taking far too long to get to resolution. This has lasting impacts on plaintiffs, defendants, victims, witnesses, etc. This is one of the reasons that I chose to put my name in for appointment. I felt that we needed trial attorneys that were willing to get in here, roll up their sleeves, do the work and get cases moving through the system.

I think that the specialty court have improved the criminal justice system immensely. As stated previously, there are a spectrum of defendants that are convicted of crimes or plead guilty to them. On one side of that spectrum are dangerous individuals that need to be placed in prison to keep the rest of us safe but on the other end are individuals that need services and can be rehabilitated. I would really like to see a probation program for minors that are certified as adults and placed in the adult system. There are a number of minors ages 15-18 that are being tried as adults. I do not feel that it is appropriate to put them in the same type of programs as adults. I think there should be a specific diversion and/or specialty court designed for them where there is a focus on education and the development of skill sets for individuals of the same age groups.

My duty as a judge would be to follow the law.